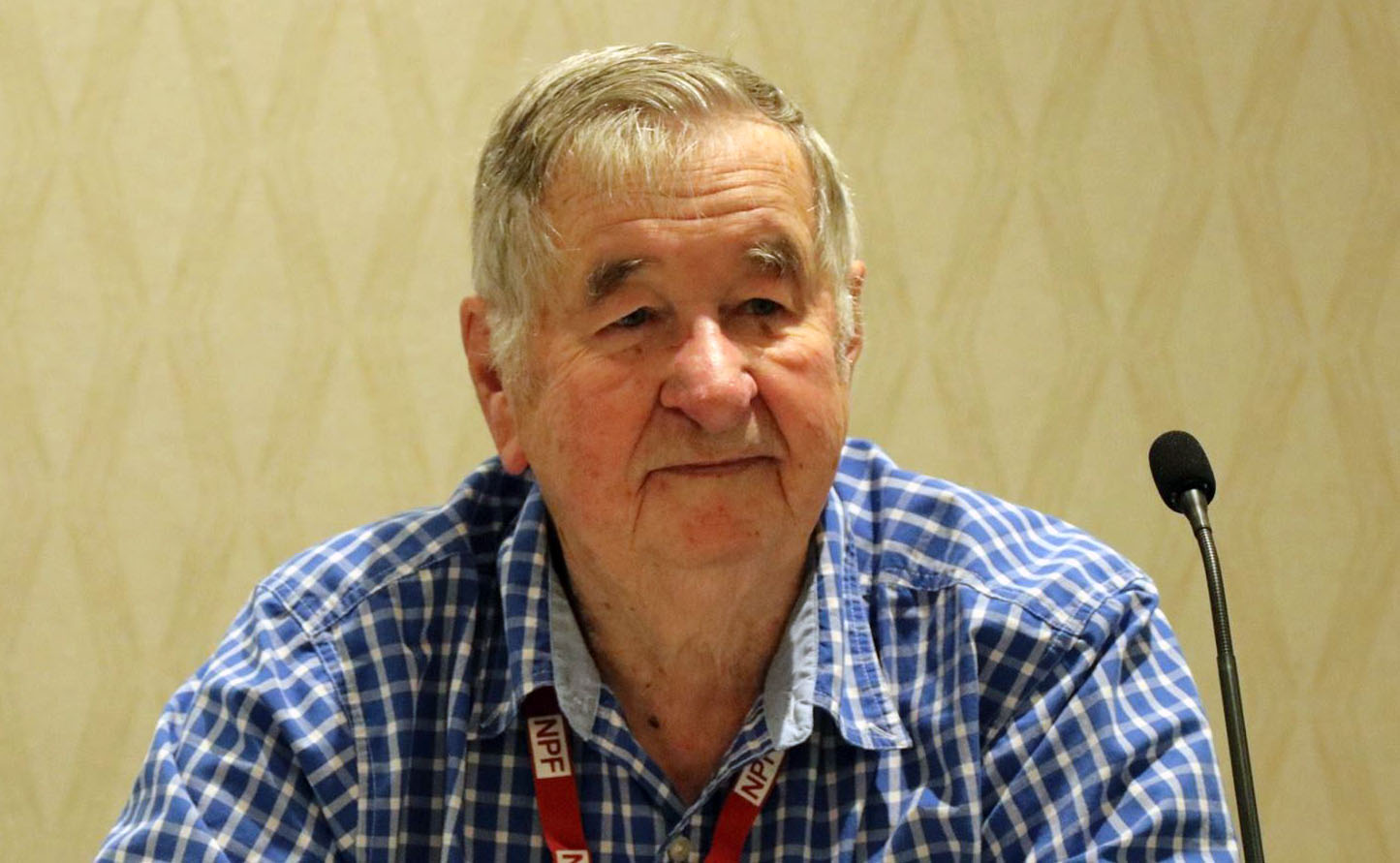 By Tim AndersonNovember 24, 2020No Comments

Pat Brady passed away on Sunday, November 22, 2020.
This profile of Pat Brady is adapted from a PostScript article from years past by JoAnn Lauber.

When Patrick T. Brady and Wim (William) Vander Zalm, his school pal, graced the halls of their high school in Abbotsford in the 1950s, few of their teachers could have imagined the impact these two students would have on future British Columbians – Bill would become the fantastic politician, and Pat matured into a leader of educators in every phase of their working lives. After high school, Bill went on to sell his father’s Bradner farm tulip bulbs while Pat went on to the University of British Columbia. In two separate periods of study, interrupted by a period of classroom teaching, Pat earned his B.Ed. From that moment on, his diverse roles and strong personal qualities have marked our teacher and retired teacher lives. A star amongst us, he was a combination of professionalism and playfulness, practicality and inspiration, wit and knowledge, vast experience and exemplary leadership skills.

When the Annual General Meeting (AGM) of the British Columbia Teachers’ Federation (BCTF) convened each year, Pat was there – longer than most of us can boast of any relationship, personal or professional! His reasons for being at those meetings may have been to fulfill various obligations, but the underlying motivation was always the same: a prevailing interest in the welfare of his peers and a desire to serve them so that all would benefit.

Pat first attended an AGM of the BCTF as an observer when he was a student at UBC – can you honestly conjure up an image of Pat, the silent observer? From that point on he would be at the AGM either as an elected delegate or as a guest speaker. However, he would be there most often because of his skill in chairing a meeting. When Brady was in the chair the meeting ran according to Brady – a chair renowned for his knowledge of the Rules of Order and Parliamentary Procedure, and for his dexterity in shaping these guides to smooth out contentious issues. He chaired AGMs and RAs of the BCTF for more than 25 years, “too many times to count”. And he did the same for the Canadian Teachers’ Federation in other parts of the country.

As a teacher, in four different districts, Pat spent thirty-five years in classrooms at all levels of the public school system. At the secondary level he taught math, history, economics, geography, keyboarding, business education, and home economics – the only male ‘Home Ec’ teacher in the province at that time.  His most memorable teaching experience, however, occurred when he was just past his teen-age years. The District of Chilliwack assigned him to a Grade 7 class of 47 students! He reminisced that not only was he to deal with all of their various levels of readiness for learning and their pre-pubescent hi-jinks, but he had also to be prepared for the possible drop-in visit of the school inspector, one who wielded “the power of professional life or death”, one whose whims and observations on a single visit could determine the career destiny of a classroom teacher, no matter how earnest and dedicated that teacher might be or how accurate, complete, and balanced his classroom register might appear.

As an active teacher, Pat enjoyed working with his colleagues, always valuing the advice of his peers. He was also a leader who recognized and served the precept that on occasions leaders have to step back and become followers. Always involved in the matters of his profession, he went on to serve as president of the Prince George District Teachers’ Association, President of the BC Teachers’ Federation (1977 – 1978), and President of the Canadian Teachers’ Federation (1981 -1982). While with the latter, Pat chaired the International Program and was a Director of the Hilroy Awards program. As well, he attended five General Meetings of the World Confederation of the Teaching profession and for two years was the chief delegate for the CTF. In Geneva, he worked with other national teacher organizations, drafting the International Labour Organization’s “Conditions of Work for Teachers” protocol.

Stepping outside his professional world, Pat was also involved in local government: four years as Alderman on the Prince George City Council; a member of a number of Council committees, including Policing, Library and Parks Boards; Regional Director for the North Central Regional District; Interior University Society for UNBC; Director of the Fraser-Fort George Regional Hospital; and Regional Museum societies. Retirement did not stem this drive. Pat the retiree continued to maintain contact with his alma mater, serving for 15 years on the UBC Senate.

Pat had a long-standing involvement in the military. During his undergraduate days he served as adjutant of the UBC Officer Training Corps.  While teaching in Prince George, he was commanding officer of both the Rocky Mountain Rangers Cadet Corps and the Rocky Mountain Rangers Militia Company; and, for many summers, he served at the Vernon Cadet Corps Camp, over the years, rising from the rank of Corporal to Major over the years. He served on the Executive Committee of the Aldergrove, BC branch of the Royal Canadian Legion, spending many hours furthering the goals of that organization.

In retirement, unlike many of us who blithely seek our bliss, dabbling here and there in preferred pursuits, Pat became even more active.  Soon after retiring in 1997, he attended an AGM of the BCRTA where he envisioned the prospects of positive organizational change. He was invited to chair the Finance Committee. In that capacity he led a team that recommended sweeping changes to the way the Executive and the association did business. Among these were recommendations that the BCRTA have three separate accounts – operation, capital, and reserve; that terms of reference be set for expenditures from the reserve fund; and that a budget format which is still in use.

As President of the BCRTA from 2000 to 2003, and also as an influential committee member, Pat “assisted with or initiated” other significant changes. These include a concerted effort to increase the number of branches; the complete overhaul of the Bylaws, Policies and Procedures; the present AGM delegation ratio and costs coverage; a designated delegate training day as part of the AGM; the separation of the R.R. Smith Memorial Fund from management by the board to its present form as a charitable society; the establishment of policies that spelled out our Fund investment guidelines and that saw the growth of our Reserve Fund’s revenues; and the entrenchment of the four insurance plans we have with Johnson’s. Recognizing the strength of partnership, Pat encouraged the BCRTA to join actively in COSCO, the vibrant Council of Senior Citizens’ Organizations in BC; and also with two national organizations – the National Pensioners and Senior Citizens’ Federation (NPSCF) and the Canadian Pensioners Concerned (CPC). Pat consistently acknowledged and promoted the contribution the BCRTA has to offer in these arenas – “it is one of the most active, dynamic, informed, and positive forces advocating for seniors in this province and, indeed, in this country.”

At the national level he held positions in the Canadian Association of Retired Teachers (ACER-CART) – Director (2003), Vice-President and Regional Director West (2004 – 2005), President (2006 – 2008) and Past President (2008 – 2010). During that time, he supported worthy federal programs and advocated in favour of changes in others.  A strong proponent of our Medicare system, Pat  pressed for improvements in the laws governing patent rights and the availability of generic drugs, for the establishment of a national Pharmacare program, and national oversight on stock market matters. In the time of his leadership, ACER-CART teamed with other like-minded organizations to advocate for, and achieved, the enactment of pension income splitting legislation as well as an increase in the age of mandatory RRSP withdrawal.  He held several leadership positions at the Council of Senior Citzens’ Organizations (COSCO).

Every organization he touched became better organized, more financially sound, more focused on its philosophical goals, and more cognizant of the needs of its individual members.

An honorary lifetime member of the Prince George District Teachers’ Association and of the BC Teachers’ Federation, Pat was decorated by the Canadian Armed Forces and was awarded the BCTF’s George Fergusson Award for outstanding contribution to education.

He was also made a Life Member of the BC Retired Teachers’ Association.

This was Pat Brady – Renaissance man in the true sense and a remarkable embodiment of all the attributes: scholar and soldier; adventurer (those trips to Vegas) and artist (“tickling the ivories” and wielding a persuasive pen); sportsman (surely hosting 40 annual Grey Cup parties is qualification enough in this pursuit); pragmatist and visionary; politician and active, contributing citizen; a trusted mentor; a respected leader.

And a delightful friend.